When thinking of strategies to treat Lyme disease and manage Lyme symptoms, many treatment modalities come to mind. Long term antibiotics, daily multivitamins, and Vitamin B12 along with low dose naltrexone are current treatment options that have been shown 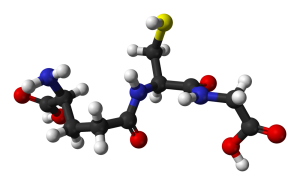 to help with the treatment of the disease and the management of symptoms. Recently, the potential benefits of the powerful naturally occurring antioxidant, glutathione have been brought to the forefront. Glutathione is a tripeptide, comprised of the amino acids cysteine, glycine, and glutamate. It is a non-essential nutrient, meaning we do not need to consume it from our diet since it can be synthesized from the three amino acids in the body. However, the rate limiting step in this synthesis process is cysteine, which is a semi-essential amino acid. This means it may or may not need to come from the diet, depending on body conditions. In a patient with Lyme disease, the infecting spirochete Borrelia burgdorferi passively absorbs the cysteine the body produces and uses it to manufacture many of the enzymes it needs for its own metabolism, causing a depletion of cysteine and ultimately a decreased amount of glutathione.1 This depletion of glutathione ultimately leads to cell death, making the clinical implications of this molecule of great significance.

Reduced glutathione is very often referred to as the Body’s Master Antioxidant. The most abundant source of glutathione in the body is in the liver used for detoxification, but it can also be found in almost every cell in the body. Free radicals (reactive oxygen species, reactive nitrogen species, etc.) are produced by bacteria, such as Borrelia burgdorferi (among other processes), and can cause damage to healthy cells. As glutathione is used to neutralize the damaging free radicals, it also becomes depleted. The ratio of reduced glutathione to oxidized glutathione within cells is often used as a measure of cellular toxicity. In a patient with Lyme disease, manufacturing glutathione can be problematic since the rate limiting amino acid used to synthesize glutathione, cysteine, is being used by the bacteria itself. Also, a small but increasing subset of patients may possess a faulty Glutathione S-Transferase Mu 1 (GSTM1) gene which may further increase susceptibility to toxins and free radicals.2 This poses the question, how can we increase glutathione/glutathione production in a patient with Lyme disease to help combat free radicals?

One approach in the past was to provide oral supplementation. Research has shown that, although there is a specific glutathione uptake mechanism across the intestinal epithelium, the molecule is catabolized before it reaches the liver making oral delivery of glutathione for systemic use challenging. However, since glutathione is absorbed into the cells lining the intestinal tract, there is speculation that this delivery form may be effective for patients suffering from GI diseases such as Crohn’s Disease. Another approach is intravenous repletion, which has demonstrated an increase in plasma glutathione concentrations. While this approach may be appropriate for some patients, the inconvenience, cost, and invasive aspect of IV therapy may not be desirable. IV standards for treatment of Lyme disease have not been established, but a study conducted using patients with Parkinson’s disease concluded that twice daily infusions showed maximal results, requiring copious amounts of time and money for treatment.4

Nasal sprays and topical glutathione creams seem to be a good pathway to bypass the potential problems with oral absorption and possible destruction by digestive enzymes. When glutathione nasal spray is inhaled, it meets the nasal mucosa which has a richly supplied vasculature, allowing the molecule to directly enter the blood stream. Topical delivery offers a convenient alternative to IV dosage which allows absorption of glutathione across the dermal layer into the blood system. Both glutathione nasal and topical preparations offer the desired outcome, an increased level of glutathione without the inconvenience of IVs, time, and elevated cost.

Other approaches to increasing glutathione levels focus, not on putting more intact glutathione in the body, but introducing more cysteine into the body. Cysteine is the rate limiting step in the formation of glutathione, so decreased levels would lead to decreased levels of glutathione. One approach to increasing cysteine levels includes administering oral N-acetylcysteine or NAC which is then converted into circulating cysteine for glutathione synthesis. This approach has not been studied in Lyme disease affected patients but could be another potential route to increase glutathione levels; however, this approach needs further study. IV NAC has shown promise in improving HIV symptoms, but no studies have been conducted in the Lyme disease community. Also, as previously discussed, IV formulations may not be desirable due to anaphylactic reactions. Another aspect to consider, the precursor of cysteine is methionine, which is converted from homocysteine using methylcobalamin or activated Vitamin B12. So in theory, increasing levels of methylcobalamin would increase the amount of methionine in the body that can be used for cysteine synthesis and ultimately glutathione production.     Lyme disease, glutathione

Written by Erin Hurley Era, PharmD Candidate, Class of 2013, at the University of Maryland Eastern Shore School of Pharmacy.