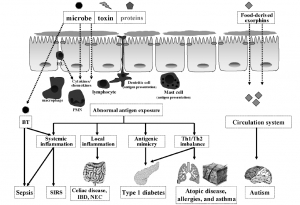 (36.7%) compared to patients without autism, or normal subjects (4.8%). The study concludes that measuring a patient’s gut permeability can identify patients who would benefit when put on a gluten-free diet. This may be due to an increase in zonulin in the intestines, which increases gut permeability. In genetically susceptible individuals, zonulin is unregulated. This causes the gut to become “leaky”, allowing more foreign and toxic substances to enter our body, causing inflammation, tumors, and autoimmune disorders such as diabetes and celiac disease. Gluten increases the secretion of zonulin, so by avoiding gluten, the intestinal tract would prevent unnecessary byproducts from entering the blood stream, which would reduce inflammatory responses as well as interferences to the central nervous system. Researchers hypothesize that some aspects of Autism can be due to toxic metabolites taking advantage of the leaky gut and affecting the developing brain. Dietary-derived opioid peptides, such as casein and gluten metabolites, are typically digested in the intestine. However, a leaky gut would allow these peptides into the body, which may play a part in symptoms related to autism.

Magistris LD, Familiari V, Pascotto A, et al. Alterations of the Intestinal Barrier in Patients With Autism Spectrum Disorders and in Their First-degree Relatives. Journal of Pediatric Gastroenterology and Nutrition 2010;51(4):418–424. doi:10.1097/mpg.0b013e3181dcc4a5.

Written by Thomas Tran, PharmD Candidate at the University of Maryland Eastern Shore School of Pharmacy