Over centuries, apple cider vinegar has been used in various ways. The use of apple cider vinegar or ACV, dates back as late as 5000 BC. The Babylonians used it as a pickling agent and a preservative in foods. Around 400 BC, Hippocrates, the
father of modern medicine, was known to prescribe ACV with honey to treat colds in ancient Greece. Militaries were also known to use ACV as an antiseptic agent for wound cleaning and also ingested it for energy.1

Today, the numerous health benefits of apple cider vinegar are being proven and are still vastly used for various reasons, such as the ones listed below.

A recent study conducted in 2016 showed that rats who were given high fat diets and ACV daily, had lower total cholesterol, lower LDL or bad cholesterol, and lower triglyceride levels than those rats that did not receive ACV. The rats receiving ACV also showed to have an increase in HDL or good cholesterol levels by about 39.39%.3

It has shown that ACV may also help you lose weight. The acetic acid found in ACV has been shown to increase your metabolism, decrease your appetite, and even reduce your water retention. It is also in theory that the contents of ACV may lower starch digestion, which may contribute to the weight loss.2 A study conducted in 2005 also showed that ingesting ACV with a meal, decreased the blood glucose levels in healthy patients while increasing the feeling of satiety.4 Another study also showed that diabetic patients who took 2 tablespoons of ACV before bed had lower blood sugar levels in the morning.2 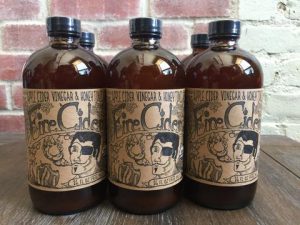 The acetic acid found in ACV prevents most bacteria from thriving. ACV also contains potassium which thins the mucus that causes nasal congestion. Gargling ACV diluted with water has also been shown to prevent the onset of a sore throat.2

Potassium as well as the enzymes found in ACV have been found to help alleviate muscle fatigue and leg cramps. The amino acids also found in ACV have been shown to help boost energy levels as well. Many people suggest drinking a spoonful of ACV before and after exercising to increase energy and decrease muscle soreness.2

The pH level of ACV is close to the pH level of what a healthy scalp should be. Rinsing or leaving in diluted ACV in the hair and scalp for a few minutes will help clear the hair and scalp of many impurities. It will leave your hair shiny and soft and your scalp dandruff and itch free. The healthy scalp pH will then also promote hair growth as well. The acetic acid in ACV can prevent bacteria from multiplying, which can reduce acne formation if used as a toner diluted in water.2

Although ACV has been used for centuries and has shown promise in health benefits, many studies are still being conducted to understand the full mechanism of how it works in the human body.

As with any addition of non-prescription supplements to your medication regimen, be sure to first discuss with your healthcare provider and/or pharmacist if supplementing ACV to your diet is safe for you. Community Farmacy proudly sells Bragg’s Organic Apple Cider Vinegar, as well as Fire Cider – Apple Cider Vinegar with a kick! Stop in and ask for a sample!

Written by Shoghag Aktavoukian, PharmD Candidate, Class of 2017 at the University of Maryland Eastern Shore School of Pharmacy.