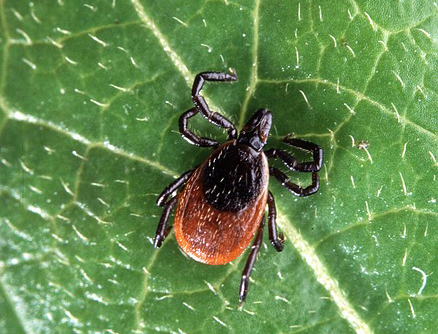 Lyme disease is caused by a bite from a tick carrying the bacterial spirochete Borrelia burgdorferi, and is the most common tick-borne disease in Northern America; however, this does not mean it is only transmitted by ticks. Recent studies indicate that mosquitoes may also carry the spirochete. A patient infected with Lyme disease may also have numerous other co-infections such as anaplasmosis, ehrlichiosis, babesiosis, bartonella, and Rocky Mountain Spotted Fever that will need to be identified and treated. Early symptoms of Lyme disease include fever, headache, fatigue, depression, and in some cases the distinctive skin rash commonly called the “bulls-eye rash” also known as erythema migrans. If caught early, conventional Lyme disease treatment is usually successful, using antibiotics up to 28 days. However, because the symptoms of Lyme disease can mimic other disease states and the current laboratory testing is controversial, Lyme disease can remain undiagnosed in a patient for some time, leading to chronic symptoms in the joints, heart, and central nervous system that may be difficult to treat. This is where alternative medicine, along with conventional therapies are utilized to treat the disease and decrease symptoms.

For more resources on Lyme, please visit the International Lyme and Associated Diseases Society at www.ilads.org.

A biofilm is defined as a group of microorganisms that stick to each other on a surface. These organisms produce a substance called extracellular polymeric substance (EPS). EPS is primarily composed of polysaccharides and proteins, but other molecules such as DNA and lipids are also contained within these structures. What makes attacking biofilms particularly difficult is the fact that there may be a variety of bacteria and fungi living and thriving within the biofilm. What also must be noted is that bacteria living within a biofilm are functionally different from the same bacteria in planktonic form—that is free floating bacteria outside of the biofilm. The bacteria within the biofilm are able to communicate with each other and from this communication they can express genes that will aid in the growth and survival of the biofilm. Furthermore, once the biofilm is of an adequate size, pieces of it may fragment, or detach from the structure, and travel elsewhere to attach to another surface, thereby making the resistance greater.

Low Dose Naltrexone (LDN) was originally developed in the 1970′s to treat heroin addiction, but studies have shown that in low doses it actually depicts an increase in immune function. It is used to treat symptoms of Lyme disease, such as fatigue, myalgia (muscle pain), and arthralgia (joint pain). LDN is thought to work three fold, by decreasing inflammation caused by the disease state, increasing the function of the immune system, and releasing natural endorphins that are natural pain killers and also enhance mood. LDN is started at a very low dose and increased over time. It is compounded into capsules from 1mg to 4.5mg to allow for this dosage titration.

Cholestyramine may be an old drug, but it now has a new purpose. It is designed to bind to unwanted substances (initially cholesterol) in the gastrointestinal tract for excretion. There has been recent evidence that Borrelia burgdorferi release a neurotoxin, thought to be responsible for many of the lasting symptoms patient’s experience. This neurotoxin is sequestered by the liver and released with bile into the GI tract. However, instead of this neurotoxin being excreted when our bowels are evacuated, it is reabsorbed into the intestines and returned to the liver, perpetuating the cycle. It is thought that cholestyramine will bind the neurotoxin in the GI for excretion, thus overtime reducing the neurotoxin burden on the body. It is important to note that while cholestyramine does bind unwanted substances for excretion, some wanted substances, such as fat soluble vitamins, are also excreted. This just requires vitamin supplementation. Cholestyramine is available commercially; however, the sugar contained in this product may cause yeast overgrowth which could be detrimental to patients. It is recommended that this medication be compounded so there are no unwanted additives such as sugar and artificial sweeteners. It is compounded using Xylitol and Stevia (a natural plant sweetner).

Glutathione has been referred to the Body’s Master Antioxidant, it is naturally produced in the body and mainly found in the liver but is also found in almost every cell in the body. It is thought that the neurotoxin produced by Borrelia burgdorferi causes the release of reactive oxygen species and reactive nitrogen species that require the assistance of glutathione for clearance. In a patient with Lyme disease, this process is ongoing, eventually depleting glutathione essential for anti-oxidation. Along with the consistent depletion of glutathione, Borrelia burgdorferi uses our body’s cysteine which is essential for the formation of glutathione. This makes it difficult for the person with Lyme disease to manufacture more glutathione because one of the pieces needed for manufacture is depleted by the bacteria. If glutathione is severely depleted in a cell, the cell will then die, making replenishment of glutathione a must. Since glutathione is not viable when taken orally, it is compounded into nasal sprays and creams for absorption into the blood stream.

Curcumin is a water soluble orange-yellow colored powder and is one of three curcuminoids found in the herb, turmeric (Curcuma longa). The other curcuminoids found in turmeric are demethoxycurcumin and bisdemethoxycurcumin. Turmeric is a yellow Indian spice which has a long history of treatment for inflammatory conditions in Ayurvedic medicine in India. Curcumin is the main constituent of turmeric and was identified in 1910 by Lampe and Milobedzka. Curcumin has been known to treat a vast number of indications such as rheumatoid arthritis, ulcerative colitis, dyslipidemia, Alzheimer’s disease, and even certain cancers.

If you have any questions about Lyme disease or its treatment, please contact a compounding pharmacist at Community Farmacy, (410) 749-1899.